BOLLINGER: A MAISON FOR TWO WINES THAT HAVE BECOME LEGENDS 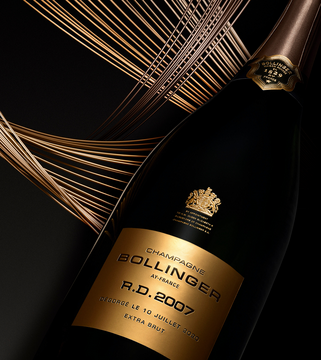 Maison Bollinger was founded in AY in 1829 and it quickly acquired an important package of vineyards classified Grand and Premier Cru, forming its current 168 hectares.

The Maison’s greatest expansion in terms of quality and fame came in the immediate post-war period, when Scottish-born M.me Lily Bollinger took over at the helm of Bollinger on the death of her husband. Under her guidance, Bollinger reached such high levels of quality that it is still enjoying its fame today. The widow Bollinger is responsible for the two most important wines that they still produce today, namely Cuvée R.D and Vieilles Vignes Françaises.

R.D., or récemment dégorgé, is the first cuvée in champagne to have a dosage of only 6 g/l, when the average at the time was 12 g/l, and above all it is the first champagne to bear the date of disgorgement on the label. These two aspects seem obvious, but in the sixties it was a real revolution destined to change the identity of champagne forever.

R.D. was the result of Lily Bollinger’s idea of leaving La Grande Année (not called that at the time), the Maison’s flagship vintage, on the lees for several more years.

The thing that makes Bollinger unique and unmistakable is that, to this day, it is the only maison with in-house tonnellerie, i.e. on-site production of barrels for fermentation of the base wines, and one of the very few maisons to keep the vin de reserve in Magnums with slight overpressure (they have at least 700,000 in stock) and all sealed with cork. Even today, all R.D. and VVF bottles are disgorged by hand and only in recent years with the help of neck icing.

VVF, as Vieilles Vignes Françaises is called, is the only champagne produced from Pinot Noir vines with plants having no American rootstock, bred by propagation as was the custom before phylloxera. This practice makes VVF the only evidence now available on the market of what Champagne was like before phylloxera destroyed most of Europe’s vineyards at the turn of the nineteenth and twentieth centuries.

The VVF is the historical memory of Champagne produced only in great vintages from two very small vineyards adjacent to the maison (until a few years ago there were 3 vineyards but one was attacked by phylloxera in 2003) and production stands at around 3500 bottles per vintage produced. This very small production makes VVF an object of desire for every wine lover.

A brief anecdote gives an exact idea of the greatness of M.me Bollinger, who until her death in 1978, despite huge pressure from many of the brand’s merchants and distributors around the world, Bollinger never produced a rosé champagne because Lily Bollinger considered it vulgar and only suitable for the brothels in Paris. Following her death, the house gave in to the demands and began producing the Grande Année rosé cuvée and, judging by the latest tastings, one might well say that the widow Bollinger was, for once, wrong!

To close this short biography on Bollinger, a sentence uttered by M.Me Bollinger that has now become legend: “I drink Champagne when I’m happy and when I’m sad. Sometimes I drink it when I’m alone. When I have company I consider it obligatory. I trifle with it if I’m not hungry and drink it when I am. Otherwise, I never touch it — unless I’m thirsty.”